After several delays we finally left McMurdo on November 2nd. Everyone else in our deployment group had left on Saturday. So though the handful of us polies were “stuck” in town for another 5 days we got to attend the famous McMurdo Halloween Party, the first big party of the season. I went as a “Herc Fairy” with cardboard plane wings and tail and a bag of cards on which were typical flight notices and reasons for delay. I got a lot of laughs, especially from the several C-130 flight crews who were there at the party.

On Sunday the wind picked up and blowing snow reduced visibility to tens of feet at best, making travel outside treacherous even though the temperatures weren’t particularly cold. In town it was “Condition 2” out at the airfield and remote sites it was “Condition 1.” Over the next few days McMurdo was more or less buried in drifts of blown snow. Obviously, all flights were cancelled for the first part of the week.
Wednesday Nov 2nd broke sunny and calm, but it took several hours for the equipment to clear the runway of snow and get the planes ready to fly. The flight to the South Pole is about 3 hours on a C-130 Herc. While most flights to Pole bring in the full ~40 people, our flight had only 9 pax and several pallets of cargo. After lunch we gathered at the MCC and piled into the back of a lumbering Delta truck which took us down to the airfield. We waited there for about an hour, only to hear there was a mechanical issue with the Herc and we were delayed until further notice. The last group had spent 6 hours waiting at the airfield only to have their flight cancelled in the end so expectations were low. This time however, they fixed the issue we were cleared to leave at 4pm.

We filed into the plane juggling the bulky, orange carry-on bags and stuffing hats, neck gaiters, gloves, and goggles into the pockets of our Big Reds (a nickname for the huge red coats issued to all personnel deploying to Antarctica). The seats on a herc are comprised of flat webbing supported by metal rods which fold out from along the walls. Unlike on commercial planes, passengers (pax) sit sideways to the direction of travel. Additional seating can be installed along the center, but with all our gear and clothing there’s not much room to stand up, let alone try to move forward or aft. With only a handful of us we had plenty of leg room at least. Stretching seatbelts around Big Red, shedding layers in the warm air of the heated plane, and scooting closer together to fit everyone side by side along the walls we were briefed on emergency procedures and given ear plugs. As everyone was getting settled the loadmaster leaned over to me and asked “Are you the Herc Fairy?” I laughed and nodding yes. “They’re asking for you up in the cockpit.” 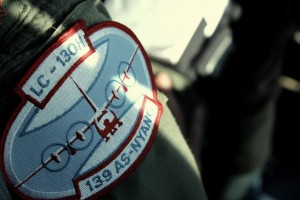 The patch worn by the C-130 Herc crews

The crew had received word that I’d be on the plane and remembered me from the party. The cockpit of the C-130 is larger than a commercial jet, but every inch of space is crammed with switches, buttons, dials, and controls. It sits above the cargo deck and a short ladder leads up from the door in which we entered. The pilot and co-pilot sit up front surrounded by numerous windows, between and behind them sits the engineer who keeps and eye on fuel tank levels, changing them when necessary, and stands by for any mechanical problems that might arise. Behind him on the right side of the plane sits the Navigator at a little desk filled with radio and navigation equipment, gauges showing various flight stats, a computer for navigation, and a bag full of backup maps and charts. 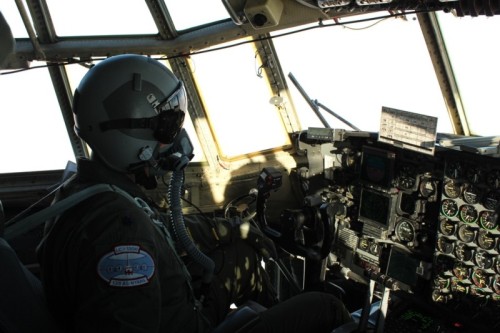 The C-30 co-pilot wearing the helmet and oxygen mask as they came in land at Pole which is at nearly 10,000ft

There are two seats in the very back for two extra people and a bunk up by the ceiling. As soon we got off the ground I was ushered up to a space by the windows, next to the engineer and in between the pilot and nav. Leaving McMurdo we climbed to just above 20,000ft and flew over the frozen Ross Sea along the Transantarctic Mountains, eventually crossing the 14,000ft peaks. The views were incredible as we watched the sea ice join the glaciers which filled the valleys and revealed textbook flow patterns and detailed crevasse fields. The glaciers grew to eventually smother the mountains all together as it flattened into the wide, flat, blinding expanse of the polar plateau. 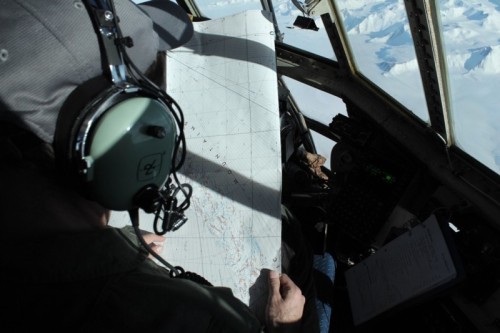 While much of Antarctica is volcanic the Transantarctic Mountains are comprised of sedimentary layers above granite. They were uplifted about 65 million years ago and many of the Antarctic fossils come from this region. The East Antarctic ice sheet spills over the mountain range and into the Ross Sea in beautiful and massive glaciers. These glaciers provide the only overland route across the mountains to reach the geographic South Pole. The Amundsen-Scott South Pole Station is there, at 9,300ft and roughly 800 miles from McMurdo. I’ll write more about the South Pole Station itself soon. 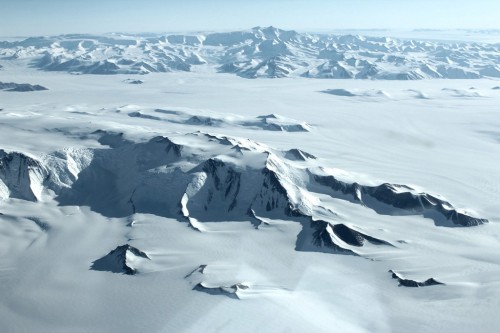 The 3,500km long Transantarctic Mountain Range runs across the entire continent of Antarctica from the Ross to the Weddell Sea. It separates the two halves, West and East Antarctica, which are distinct in elevation, accumulation rates, and thus glacier flow rates, and also reaction to climate change. West Antarctica includes the Peninsula and is bordered by the Ross and Weddell Seas, areas in this region may get up to a meter of accumulation per year. East Antarctica on the other hand, is a huge polar plateau at higher elevation and with extremely little accumulation. Combined the two ice sheets contain almost 60% of the world’s fresh water.

The radar on the Nav’s panel picked up Pole around 70 miles out, but it wasn’t until we were only 20 miles away that we could see a small dark speck on the great flat white. We landed around 7pm and were greeted by a crowd of excited winter-overs leaving on the same plane, and a few cargo and fuelies who came in before us. 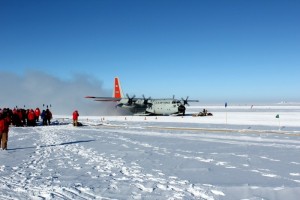 Stepping off the plane into the sterile bright light and blinding white expanse my heard raced from a combination of the altitude, temperature, and adrenaline. Due to the cold and the limited time on ground the Hercs don’t shut off the engines and props so it’s deafening. Exhaust condenses around the planes shrouding everything behind it in a freezing fog. My heavy FDX blue boots crunched on the snow and I could feel exactly where my face was exposed between neck gaiter and glasses. It was -58 F with a -89F wind-chill. Not cold enough to cause frostbite immediately, but pretty cold.

The air caught in our throats and lungs from the cold and everyone coughed, and smiled, and struggled towards the station in bulky ECW gear and with our heavy bags. Coming directly from sea level to nearly 10,000ft is a bit of a strain on the system. Hearts race and despite lots of water and limited exertion slight dizziness and headaches are to be expected. The Herc loaded up the winter-over pax and left quickly, the rest of us settled in the station for a welcome/safety brief and got some dinner. 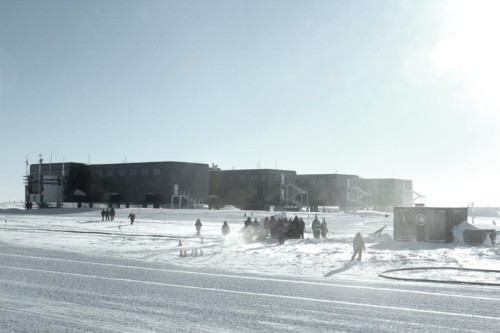 The skiway side, and main entrance for the South Pole Station.