At 3am on the morning of our “ice flight” we met at the CDC. After donning our ECW and doing a little repacking we were bussed across the road to the airport to meet the C-17. It was still dark and eerily illuminated by flashing orange lights. We were issued our sack lunch and took our seats inside.

The C-17 Globemaster is one of the largest planes to fly down to Antarctica with an overall length of 174ft and a wingspan of ~170ft. They can carry up to 18 pallets, or over 170,000 pounds of cargo. For the flights to Antarctica they often do a mix load of pax and cargo pallets. As we stepped on board they handed us earplugs and I picked a seat against the wall, snuggling into my Big Red that we are required to bring. On flights with a lot of pax two cargo pallets retro-fitted with commercial airline seats are loaded on board, but I prefer the seats along the wall.
It’s loud and bright inside, with only a few small portholes. Ducts and bundles of wire trace the ceiling and walls of the cargo hold. We settled in and soon enough were in the air. As I said, it’s loud. Leaning close you still have to shout, so everyone either fell asleep or pulled out their books and laptops. I took the opportunity to catch up on much needed sleep, feeling jet lagged again after the 230am shuttle pick up.

72 pax and several pallets of cargo 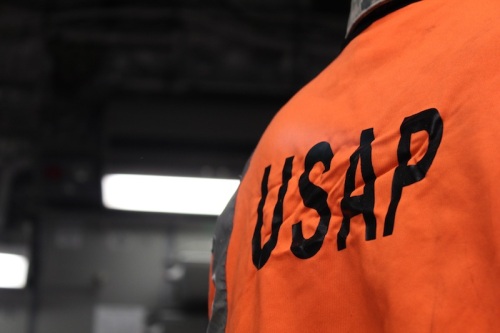 Just over an hour from McMurdo I went up to the cockpit to take some pictures. By now we had come in sight of the southernmost continent. Smooth white sea ice blanketed the ocean, showing the dark waters beneath through cracks here and there. Huge icebergs sat locked in place.
As we moved over the continent itself rocky mountains peeked above the snow covered glaciers. Scattered clouds cast their shadows across the milk white silky ice. These are my favorite images of Antarctica. Huge crevasse fields and ice falls, untouched ice streams, beautiful ripples formed as the fluid ice deflects around mountains of rock…Some of the glaciers are tens of miles across and hundreds of miles long. There is no scale, no sign of life. It’s desolate, and awe inspiring.

Another photo from the flight last year showing the transition from grounded glaciers to floating sea ice with trapped icebergs.

After 5 hours of flying we touch down on the ice. There are two runways here in McMurdo – the sea ice runway and “Pegasus” on the ice shelf. The sea ice runway is close to town, and is usually used until Nov/December, but this year the ice is thin, too thin already to land C-17s. Pegasus is on the ice shelf that stays frozen year-round, so there it’s solid, but over an hour from station on Ivan and the new Kress machines. The ice is groomed and grooved and works more or less like a paved runway elsewhere. While only ski-equipped planes can land at Pole or in the field, the wheeled C-17s have no problem.
Over the intercom the pilot announces: “Welcome to Antarctica!” And everyone comes alive pulling on hats, sunglasses, Big Reds, and gloves. The door opens and the light comes in. As I step out I can’t help grinning. The cold isn’t as harsh as I remember, I don’t zip my coat or put on my neck gaiter, but I can feel it sharp on my nose and cheeks. After a few minutes I notice a dull ache in my teeth from the cold. I try to stop smiling so much, but then see a friend from last year waiting to greet us. He envelopes me in a massive bear hug and I find myself grinning again. It is good to be back.

2 responses to “The ICE”