A season at Byrd 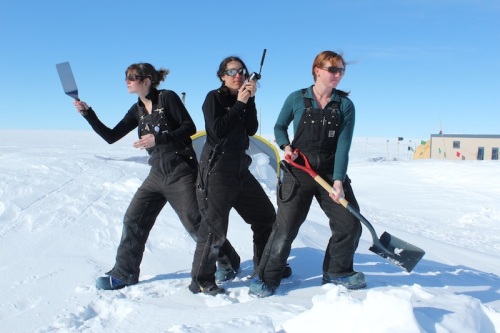 The Antarctic summer is winding down and the stations are all preparing for winter. The 5 deep field camps (Siple, PIG, WAIS, WISSARD, and Byrd) have been closed  and everyone is back in McMurdo, off travelling the world, or on their way home. It was a challenging season at Byrd, but overall a very good experience. After a beautiful and rejuvenating week of R&R in New Zealand I returned to the ice and spent a week in McMurdo working with the hazardous waste group there (All the Wasties rock – Haz and Solid!). On Februay 11th, after several weather delays, I flew down to the South Pole. We closed for the winter on Valentines day with 44 souls on station.

A few months ago on November 2, 2012, 6 of us squeezed onto a Kenn Borek Air Basler crammed with food, gear, and a snowmobile and left McMurdo crossing 1,400km into the heart of Marie Byrd Land – Byrd Surface Camp (80°S, 119°W). A C-130 (aka Herc, short for Hercules) with the rest of our supplies and crew was scheduled for the next day, though due to weather, mechanical, and priority changes it was a full 10 days before they left McMurdo.

The satellite picture we saw before heading out (uploaded in a prior post) showed significant drifting along the winter berm, but while there were huge drifts downwind, the upwind side was fairly scoured. Very little was completely buried! We set up our tents just behind the only hard-sided building and got to work. After starting the generator and getting the “galley mod” heated the first big job was digging out the equipment and then I went to work grooming the skiway.

It was about a 3hr flight to Byrd, crammed in along with a snowmobile, food, and extra gear

Our initial “tent town” on the backside of the berms – Arctic Ovens. The conical thing to the right is the outhouse.

The galley mod with the 50KW generator and mobile fueling tank. This was after we’d cleared the drifts from around it in preparation for towing it down into town 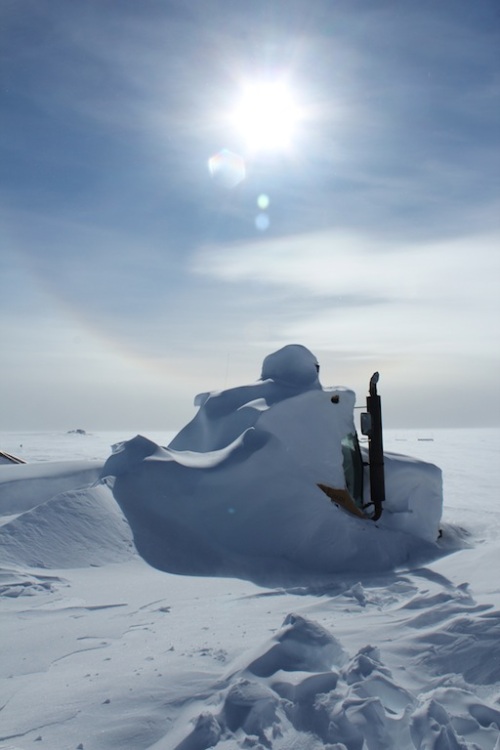 A buried Challenger 55 – not as bad as it might have been!

Melting out the 2010 Tucker

I spent many hours driving this road…smoothing out the dips and rises, compacting the snow to make a landing strip for the LC-130 Hercs, Baslers, and Twin Otters.

The next 10 days were taxing. Working 7am-midnight, getting used to sleeping in a tent at -20F, lots of digging…we would all crowd into the galley mod for meals, fill some buckets of snow to melt for water, and crash at the end of the day to sleep a few hours before doing it all over again. Once the Herc came the population rose to 20 with the carpenters (carps) and the PIG Traverse crew, and we got busy setting up the rest of camp and getting the traverse ready to go.

The traverse didn’t leave until November 28th so everyone was there for Thanks Giving. We took the day off, rearranged the galley to make one huge table, and had quite the feast. Tara did most of the cooking throughout the season, but for the big meal we had a lot of volunteers. Even without freshies (all our food was either frozen or canned) we put together a delicious and impressive spread. Two turkeys, stuffing, rosemary mashed potatoes, yams with caramelized pecans, green beans with almond béchamel, chipotle-jack cornbread, spiced cranberry sauce, and honey-soy tofu. There were several bottles of wine and delicious dark chocolate pecan, strawberry-rhubarb, and pumpkin pies for dessert. 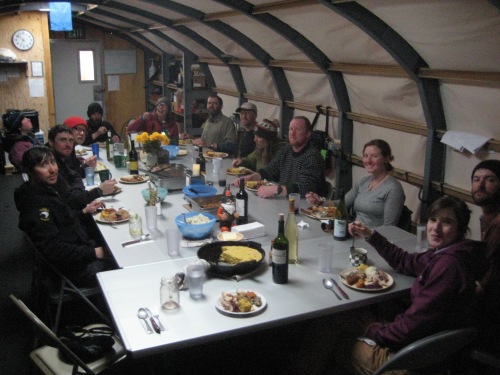 Thanks Giving at Byrd! With the PIGs, Carps, and Byrds…(Photo by Abby) 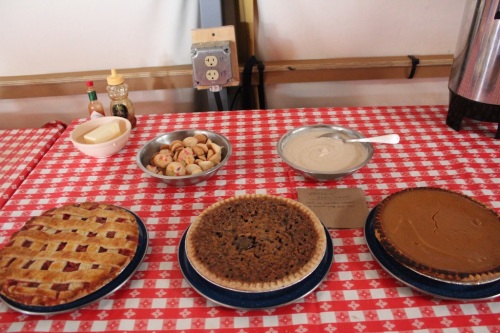 Abby and Tara enjoying a break from cooking

While they were at Byrd the carp crew was kept busy setting up the sleds and structures for the PIG Traverse and the large tents for Byrd Camp: a Jamesway for the mechanics, a smaller “Rac-tent” (kind of a modern Jamesway) for science/rec, a 40ft of Rac-tent extension on the Galley, a little blue “polar haven” tent, and 3 outhouses.

On November 28th the PIG Traverse left for WAIS Divide, taking the carps with them. Then there were four: Abby, Tara, the mechanic Toby, and myself.

The PIG traverse and their carp pax 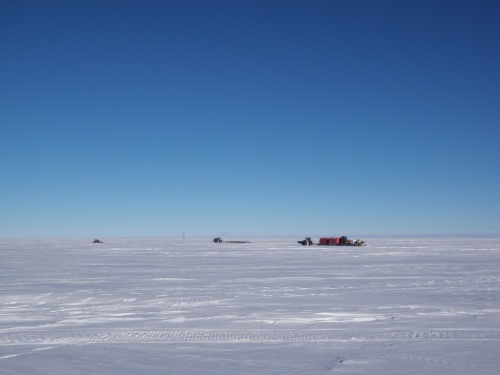 And then they were off…heading to WAIS and onto PIG – leaving just four of us behind.

As the Heavy Equipment Operator I worked at keeping the skiway groomed and got lots of practice pushing snow with the 931 bucket. Both Abby and Tara got in the equipment to help groom and Tara even got some experience pushing snow. 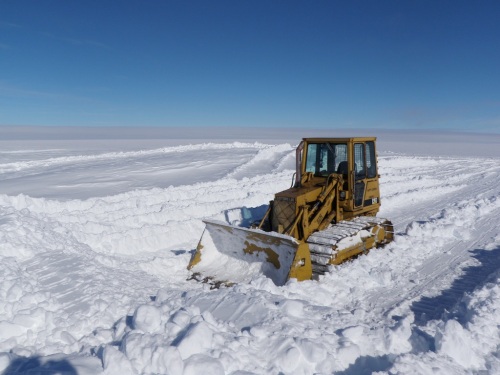 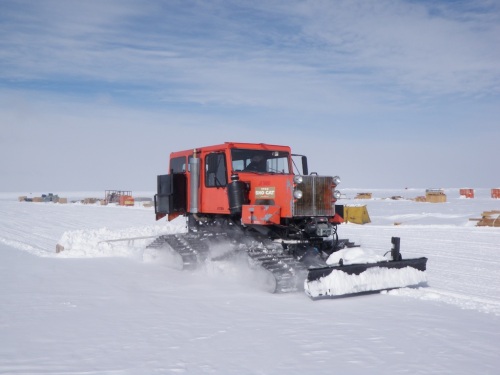 Several big storms from mid November to mid December left us well buried with monster drifts nearly as large as the Jamesways! On November 20th we had sustained wind speeds of 30 knots, with a peak gust of 36kt! I spent days on end after each storm pushing snow away from camp. On the polar plateau there is little to slow or stop the constant wind. There were a few calm days, but for the most part it stayed around 10-20 knots. MUCH more wind and drifting than at the South Pole!  The temps however were remarkably warm. For a few weeks in mid-summer it was averaging 10-20F! Our warmest day was 28F (-2C!) while our coldest was -34F (-29C)…

West Antarctic storm – The flag line to Tent City…the closest tents barely visible (my tent was to the left, past the dark box that was the outhouse)

The science tent and the galley 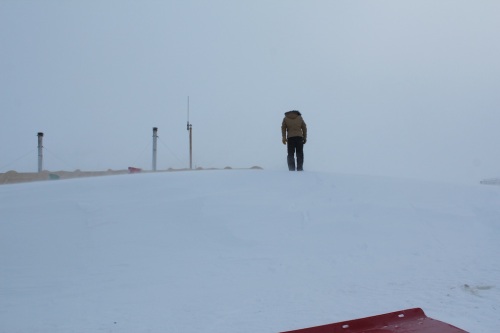 Finally the winds let up and the sun broke through to show the extent of the drifting. At it’s worst we couldn’t see more than 10 ft so we set up rope lines to follow

We had a few Hercs in December, one to bring in a carpenter and another mechanic to help with some big projects. A week later a Twin Otter came in to pull them and our original mechanic Toby back to McMurdo for Christmas. For a full 3 hours it was just the three of us girls – Tara, Abby, and I – before a second Twin Otter flew in to bring us our second main mechanic, Nate. 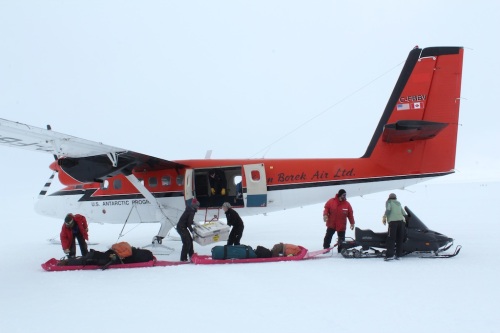 The second Twin Otter, of the British Antarctic Survey (BAS)

The next three weeks were quiet. We groomed the skiway, pushed snow, watched movies in the Science/Rec tent, cooked, and went through the pallets of material that had accumulated over the past several years. We built and sent out 29 pallets back to McMurdo over the entire season. 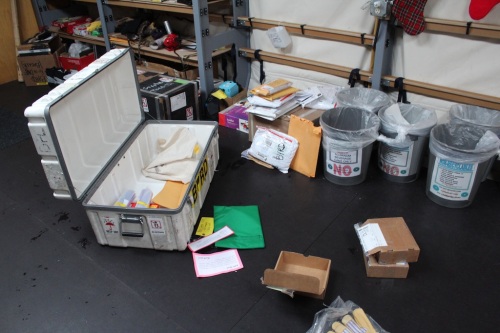 Mail! and ziplocks and new gloves…

Me loading a Herc with Leo (Photo by Denene)

Life at Byrd was calm. Our primary purpose was to maintain camp as a back-up refueling stop for Hercs flying to PIG and wait until the grantee group arrived, scheduled to arrive on January 9th. While on some level it was quite a modern camp – with Iridium satellite phones, modern industrial kitchen set-up, weather monitoring equipment, and heavy equipment to work with, at other times it felt like Little House on the Prairie…or Little Camp on the Flat White.

One of our few deliveries of freshies! There is nothing better for morale in Antarctica than freshies and mail.

Calm or storm all our water was shoveled by hand, carried inside, melted with electric heating elements, and stored in a large reservoir tank.

Rising sourdough next to the AN-8 burning KUMA stoves

Laundry! We washed our clothes by hand in the tin pails shown. It would take only a few hours to melt and warm a pail of snow on the stove.

Bathing in a new fuel containment berm with a scoop and a bucket of warm water. When it was just the four of us we set up a solar shower in the “Science” tent which we filled with water warmed on the KUMA stove. The bathing process was fairly time intensive even after we got it dialed…we all bathed once a week or two, the good part being there really isn’t any dirt out there and little cause to sweat.

Home sweet home. We each got our own Arctic Oven tent to sleep in for the season. While they were unheated, during the warmer days it got above freezing inside from solar insolation. Not too bad until the wind picked up.

Everything at Byrd ran on AN-8 jet fuel – the equipment, generators, Hercs, Twin Otters, Baslers, and heating stoves. Twice a week we would hook up the ~220gal fuel tank, top it off from one of the four 10,000gal bladders, and fill the smaller tanks at each building. 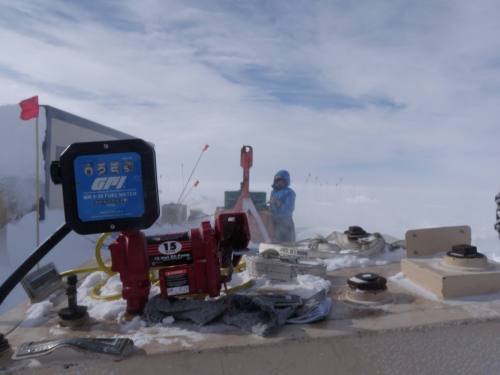 Tara fueling the 20K generator on a blustery day

Finally, after more weather delays, on January 16th the Grantees arrived! Our population jumped from 4 to 21 overnight and we switched from quietly maintaining, to a full on camp with science, flights, cargo, big projects and small. It was a challenging transition, and hard for me to stay present with R&R dates changing and the Pole winter looming nearer.

Inside the Basler – packed with geophysical equipment

With the larger population we were able to get some big projects done – such as digging out and tearing down two of our four fuel bladders to be returned to McMurdo and taking apart our Challenger Drag Queen, as the transmission had seized in late December. 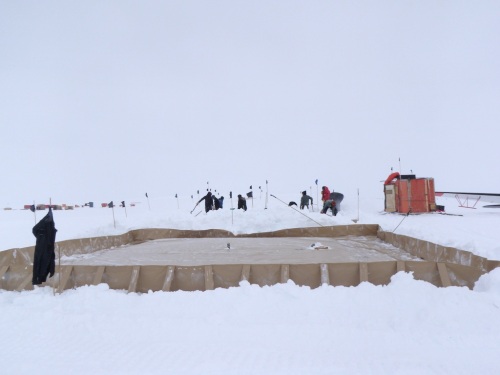 Finally on January 25th, after 85 days at Byrd, I loaded the herc – parked the 931 loader, jumped out, hugged Abby and Tara goodbye and ran to the plane! The crew was very nice and they waved me up to the cockpit for the ride back to McMurdo – even letting me call back to Byrd on their radio to say good bye and report the condition of the skiway and some damaged markers. I was a little sad to leave early (they didn’t close camp fully until the first week of February), but also very excited about everything to come – a week of R&R in New Zealand and South Pole winter 2013…

“Yonder all before us lie deserts of vast eternity.” Edward Abby

“For a while again, I remember the health of self-forgetfulness, looking out into the sky. Black woods wintry on the hill. And I know, this is one of those moments between heaven and earth, from which even I can step forth and from myself, be free.” 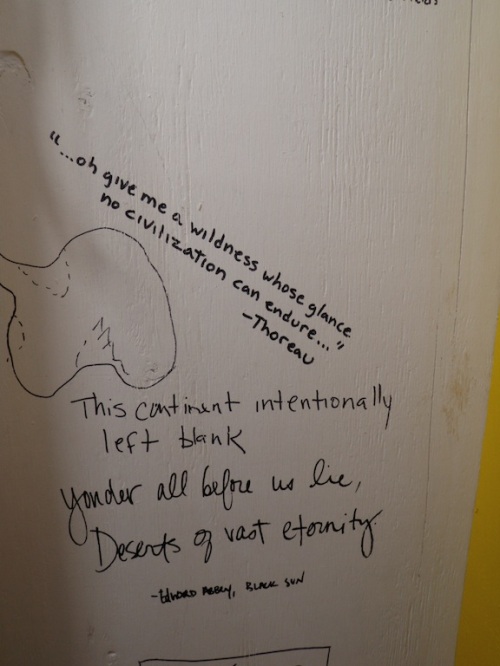 Some of my favorite, and classier, outhouse graffiti

Town proper from atop the berms – the skiway/bladders are off to the left, tent city is on the right. You can just make out the three yellow Arctic Oven tents for Myself, Tara, and Abby.

6 responses to “A season at Byrd”