Aurora Borealis and Aurora Australis – the Northern and Southern lights respectively – are one of the most iconic phenomena of the polar regions.
Dancing streams of light, ephemeral and enchanting, appear in the dark sky spanning a spectrum of color from white to green to red and near purple. They have fascinated mankind and until recently were thought to be spirits or signs from god. Today we understand the physics behind aurorae, however this explanation is no less amazing. It is still one of the most awe inspiring natural phenomena I have ever witnessed.

A nice diagram showing the magnetosphere and solar wind

Charged particles emitted by the sun reach Earth and are diverted around the magnetosphere. This strong magnetic field is induced by the spinning mass of liquid iron in Earth’s core and acts like a shield protecting Earth from the solar wind. Without the magnetosphere our atmosphere would be blown away and terrestrial life would be exposed to extreme radiation emitted by the sun. The magnetic field lines originate and converge at the axis of Earth. Solar particles are charged so they follow the magnetic field lines and are essentially funneled into the atmosphere at the Poles.

The interaction between these charged particles and atoms in our atmosphere produces light. This phenomena occurs year round, but the light is only visible in the dark of night. Here at the South Pole we have one long day and one long night each year – so the auroras are only visible during the winter months.

Auroras as seen from space

An image of auroras from space

NOAA’s space weather forecast showing the aurora oval – where auroras are most likely to occur.

Walking out to the berms to check on something or find more supplies, I watch the sky above me. With no light the stars shine brilliantly, the sweeping arc of the Milky Way plainly visible. My breath hisses in the cold, my eyelashes freezing together, my steps crunch loudly on the ultra dry snow. I glance up to see a slight glow, a pale green that gradually brightens as it expands. Other bright spots appear and it unfurls in a long curtain of light – reddish at the top and green at the bottom. It seems to stream downward, undulating and pulsing, curling upon itself in sections only to unfold again. It moves across the sky sometimes breaking into parallel lines. After a while it fades away again leaving only the darkness and pure starlight behind.

During winter everyone on station carries a personal radio with them. We can call each other individually, in programmed groups, or do an All Call. With some people working nights and others “free cycling” (for example researchers who do not have to stick to a regular schedule and instead follow a 27 hour day) All Calls are reserved for emergencies only. One of the programmed groups is “Aurora Lights.” This is a channel used to announce especially good auroras. A few months ago, when it was just getting dark, everyone would go running to the upper deck at DA when there was an aurora call. Now that we’ve passed midwinter people are starting to get a little jaded. Only an especially good aurora will draw a crowd…

This past Monday however, we had a spectacular show. Here are some pictures from myself and others here on station (as referenced):

Auroras over DA from May 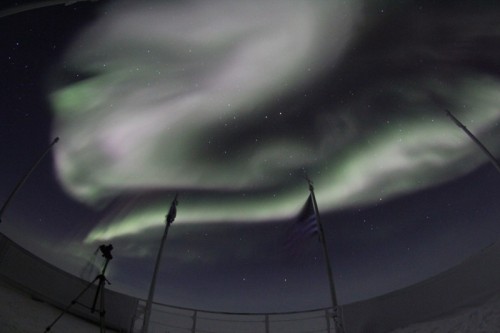 More auroras from this Monday 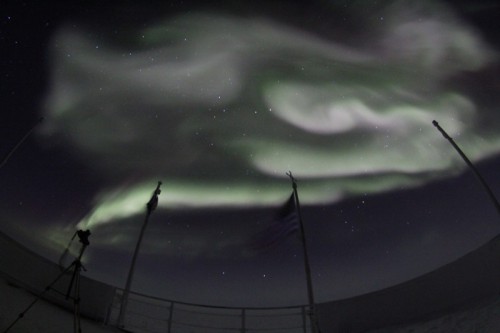 A gorgeous shot by our Research Associate Andrew

Another nice pic with a fisheye by Andrew

Auroras over the station photo by IceCuber Felipe

Another shot by Felipe

The South Pole Telescope with auroras and the Milky Way. Photo by our power plant mechanic Eddie

An awesome picture Robert Schwarz shot this week of some nice auroras and a meteor!

Home Sweet Home from the top of the ARO tower