3hrs15min to the North Pole

Kangerlussuaq, Kanger, Bluie West-8, Sondrestrom, Sonde, Søndre Strømfjord…The coastal hub for US operations is tucked back in Greenland’s longest fjord. Established in 1941 by the US military it is now a commercial and air hub for West Greenland. The small town (~550 people) is surrounded by undulating glacially scoured hills where muskox and caribou roam. No trees grow here, just scrub and grasses.

For science support and researchers coming from the US this is the point of entry. The town is comprised of a few houses, old military barracks, an airport, and a few other buildings. The Kangerlussuaq International Science Support, aka KISS, hosts researchers from around the world. There’s a very small grocery store, a cafeteria at the airport, and the Polar Bear restaurant with thai, muskox, and anything fried. It’s a small community and nearly everyone smiles and waves as they pass on the road. There is quite a lot of research done in the immediate area of Kanger and at sites on the ice sheet not as far away as Summit.
The Summit crew however usually spends a day or two getting the required gear and making sure everything is lined up for the season. There are some good hiking routes in the area and beautiful lake Ferguson and great views from prominent Black Ridge. In past seasons I’ve arrived in April when the ground is still covered in snow, and the wind is bitingly cold. This time we arrived in the warmth of summer – luckily just past peak mosquito season. The light lingered and it was bright well past 10pm. We are definitely now in the land of the midnight sun.

We spent two nights in Kanger, filling the day between with orientation, training, gathering gear, and stretching our legs on walks around town – enjoying the last bits of green and brown, of birds and bugs and people. Next stop the flat white – Summit Station!

The K.I.S.S. building that houses researchers and support staff.

Black Ridge and the old barracks 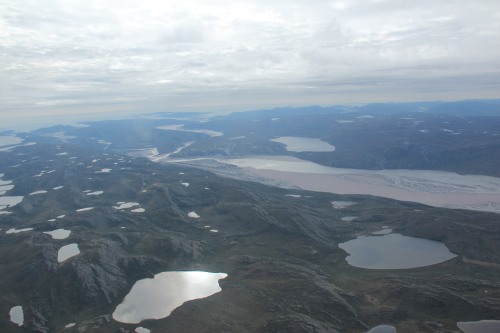