After Flight Period 4 we enjoyed a peaceful few weeks with just 11 of us on station. We focused on clearing snow from around the buildings, moving cargo off the old winter berm, equipment maintenance and many smaller projects around station.

On July 15 Flight Period 5 began with a bang: We had two flights that day the first of which brought in a Distinguished Visitor (DV) delegation for a quick visit to Summit.  US Ambassador to Denmark, Rufus Gifford, arrived with reporters from several news agencies, a PFS representative, and a NOAA scientist who will be staying on to work on some projects. It was a quick visit, but they got a tour of the station, stopping by the MSF, the GISP2 borehole, and even the freezer trench.

The second plane of the day (just 2hrs later) brought the DV tour back to Kanger, and delivered 35 new pax to Summit! This large group included the late summer carp crew, augmented with iron-workers to help with the TAWO lift project, and 25 high school students and teachers with the Joint Science and Education Project aka JSEP.

The project was developed in 2004 as a collaboration between the US, Denmark, and Greenland.  Teachers and students from each of the three countries come together for 3 weeks of learning about some of the research taking place in Greenland and the logistics that support it. Dartmouth College is also involved with professor Ross Virginia and graduate students Amber and Alden joining the group this year. (DartmouthIGERT)

The group spent 2 weeks in Kangerlussuaq visiting the ice edge and various scientists in the area followed by a week at Summit Station. This year at Summit the students learned about albedo (reflectivity) of the snow, glacial flow, and Summit history. It was great to meet the students, one of which had never seen snow before, and to learn about where they were all from. They also shared some Greenlandic and Danish vocabulary. 46 people is about as many as Summit can support, but it was fun to have them here!

Visiting the GISP2 borehole on the station tour Photo by JSEP 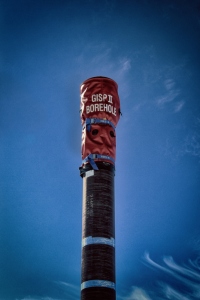 If you will be a high school senior in 2016-17, or know someone who will, and are curious about the polar regions, Greenland, and Arctic science keep an eye out here: http://www.arcus.org/jsep or contact NSF Einstein Fellow Erica Wallstrom (ewallstr@nsf.gov) for the 2016 JSEP application!

If you’re a K-12 teacher check out PolarTREC (Teachers and Researcher Exploring and Collaborating) at polartrec.com. The goal of this program is to increase teacher’s awareness of the Polar Regions and to give them tools to spread that awareness to their students back home.

Check out JSEP and some photos from their trip on Twitter at:

The JSEP group was only here from July 15-18 and we are back to 26 on station with a big focus on preparing for the TAWO lift. Much like the Big House lift last year (AntarcticArctic.wordpress.com/heavy-lifting) the 2015 TAWO project includes the additional complication of welding on new sections of steel to the building’s legs.

Meanwhile, we’re scheduled for 6 Hercs this flight period focusing on getting in as much fuel as possible in preparation for winter.