Welcome Back! After a few months off to enjoy the world of trees, mountains, swimming in lakes, and not wearing 40lbs of extreme cold weather gear the time has come to deploy again. I’m on my way back to Summit Station in Greenland. I’ll be returning as the Station Manager, the same position I held last year. This time however, I’ll be running the station through the cold, dark, arctic winter from August to  February.

In the short summer season from April-August Summit Station is a busy and exciting hub of activity. Construction projects are completed, cargo is moved with the Air National Guard, it’s home to lots of people (up to around 35), the GrIT traverse comes and goes, and multiple groups conduct their research. The sun is up 24/7 and temperatures range from -20F to 30F. Current weather graphs for Summit can be found here.

The summer is brief however, and the Hercs are needed elsewhere to support science with the US Antarctic Program (USAP) on the other end of the world. In mid-late August Summit Station shuts down for the winter (see my post here from last year: https://antarcticarctic.wordpress.com/2015/08/23/summers-end/). From August to April a skeleton crew of just 5 maintains the station and several year-round science projects. There are no LC-130 Hercs or flight periods (https://antarcticarctic.wordpress.com/2015/06/29/flight-period-4/) to deliver fresh food or new faces, just a few Twin Otter flights in October and February for crew change-outs.

At 72°North, Summit is not at the Pole, but it is above the Arctic Circle and thus has very long days in the summer and very long nights in the winter. This year the sun has been up since May 5th, but on August 6th it will set at 11:59pm to rise again just 22 minutes later at 1:21am. Gradually the “night” will lengthen until November 14th when it will become dark 24 hours a day 7 days a week. For the next few months we’ll have beautiful sunsets.

Check this link out for August sunrise/sunset times at Summit: http://www.timeanddate.com/sun/greenland/summit-camp?month=08&year=2016

It’s not as intense as winter at the South Pole, but temperatures have fallen as low as -89F and the Aurora Borealis is stunning. Check out this post on Polar Field Services Blog Field Notes about the winter at Summit in 2009: polarfield.com/blog/greenlands-summit-camp-in-the-winter.

We’ve arrived in Schenectady, NY and from here we’ll fly up to Kangerlussuaq, Greenland via the New York Air National Guard aboard Lc-130 Hercules planes. A day or two in ‘Kanger‘ and then it will be onward to Summit. It will be a busy next few weeks as we close up the station and prepare for winter.

For photos of the hercs and Kanger check out my deployment post from last year: https://antarcticarctic.wordpress.com/2015/06/22/welcome-to-summit/ 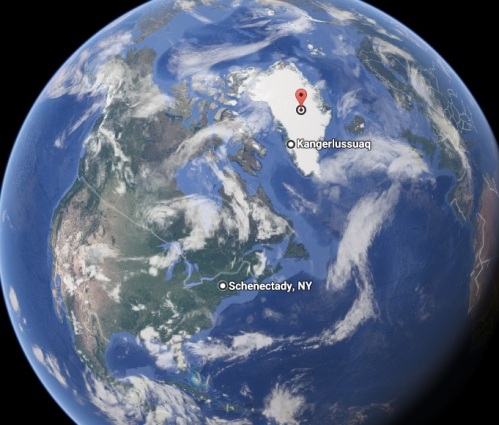