The sun is on its way back and while we still have 3 weeks until the first sunrise each day is a little brighter than the last. New Year’s Eve dawned bright and clear with crisp stars and a few very special clouds on the horizon. At first they were startling neon pink, orange, and red. The first real sign of the sun in weeks and a beautiful contrast to the greens and blues of the night sky and aurora. As the day progressed the clouds grew in size, becoming clearly iridescent. With no insulating clouds overhead it was a chilly -60F ambient. The cold temperature, otherwise clear sky, low sun, and wavy iridescent features all pointed towards these clouds being Polar Stratospheric Clouds (aka PSCs or Nacreous Clouds).

These rare clouds are both terrible and beautiful. Forming in the stratosphere at 49,000-82,000ft and at temperatures below -100F they are composed of water, nitric acid and/or sulfuric acid. While beautiful, they are implicated in the depletion of stratospheric ozone – an important protective layer against harmful UV rays. According to TheOzoneHole.com:
“PSCs were long regarded as curiosities and of no real consequence. However, Type I clouds are now known as sites of harmful destruction of stratospheric ozone over the Antarctic and Arctic. Their surfaces act as catalysts which convert more benign forms of man-made chlorine into active free radicals (for example ClO, chlorine monoxide). During the return of Spring sunlight these radicals destroy many ozone molecules in a series of chain reactions. Cloud formation is doubly harmful because it also removes gaseous nitric acid from the stratosphere which would otherwise combine with ClO to form less reactive forms of chlorine.” 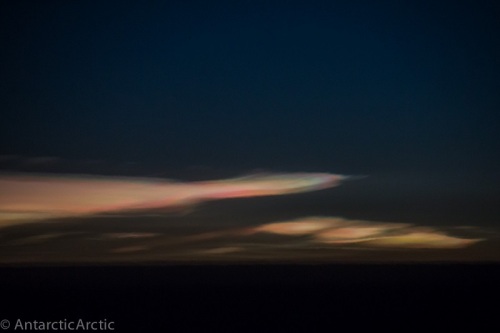 Measuring the ozone layer above us and the seasonal Arctic ozone hole is one of the many projects we support here at Summit. Every week the science techs launch a large balloon with a carefully calibrated instrument to measure ozone concentrations, as well as normal meteorological data (wind speed and direction, pressure, temperature, and humidity). The data is sent back via radio signal to the computer here at Summit.