After three days and two nights aboard the ferry we arrived at Narsaq in Southern Greenland. I disembarked, waded through the throng of people gathered to meet the ferry and headed for the edge of town. It was late and getting dark already. In Greenland one may own a house, but there are no personal claims to the land itself. Some of the larger or more touristy towns such as Nuuk, Sisimiut, Illulisat, and Narsarsuaq have designated camping areas. Obviously, it’s not polite or wise to set up a tent right next to a house, but just outside of town is perfectly acceptable.

Glaciers in the fog

I spent a few days in Narsaq, joining up with two Danish girls to hike up towards the glacier, but it rained all day and soon we were in the clouds. The rest of my time was spent exploring the quiet shore, admiring the wildflowers, and walking around town. August is blueberry season and there were lots of them all around. Birds chirped and seals swam in the ocean. I spent hours watching the immense icebergs that filled the bay – catching one just as a large chunk broke off under water! It splashed and bobbed to the surface, sending waves radiating around the inlet.
Once a boat came careening around a point, skipping along the water. It slowed just in time to ride it’s wake to the shore. A man jumped out followed by another, they crouched next to some rocks and started firing their rifles at the water – as far as I could tell they were trying to shoot each other’s splashes, or maybe small pieces of ice…firing as many rounds as possible in about 5min. Then they jumped back into the boat and sped back to town. Target practice? Using up old bullets? Testing hunting equipment?

After a few days in Narsaq I continued South to Qaqortoq. Boarding the small ferry I noticed I was the only tourists – just myself, a young very pregnant woman with her partner headed to the regional hospital to give birth, and a teenage boy.

Qaqortoq is a much bigger town than Narsaq. There are several grocery stores, a cafe, and well defined trails around the hills. Homes and apartment buildings spread across a low area between and two hills, the sea, and back to a lake. There are few good spots to camp. Standing by the closed Tourist Information center I noticed another traveler I had met in Narsaq walking along the road towards me. He stopped to say hello and mentioned that he was doing a tour to the Hvalsey Church ruins in a few minutes. With no other plans and the information center and museums closed for Sunday I decided to tag along. Luckily there was space aboard the little boat and the captain tossed my big pack in the back. There were several Danish folks as well.

The ruins were amazing. Most of the Norse ruins I had seen until this point were simply mounds of dirt or piles of stones. Hvalsey Church however, stands 56ft long and 26ft wide with four standing stone walls. The masonry is remarkable with open window and door frames. The church is one of the best preserved Norse ruins in Greenland and is also the site of the last written record of the Greenland Norse – a wedding in September 1408. It was built on the farm and ruins of other buildings dot the surrounding area. 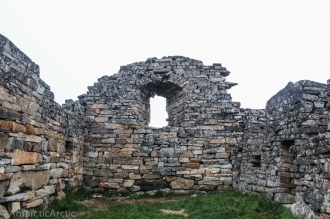 After exploring Hvalsey Church we stopped at a Danish experimental farm along the Eastern shore of the fjord. Vegetables grew in rows outside with greenhouses sheltering tomato plants and other less hardy species. Beyond the vegetables evergreen tress grew in clumps fenced off from the sheep that wandered the hills.

Back in Qaqortoq I hiked around the surrounding hills. In town I visited the Great Greenland Fur House which prepares seal skin products, as well as caribou skin, arctic fox, arctic hare, and the odd Polar Bear skin. Interesting. 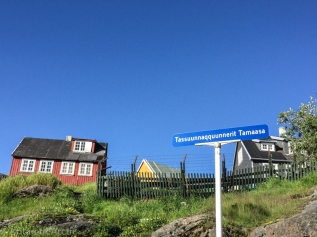 At last it was time to continue on to my final stop: Narsarsuaq. The main hub in Southern Greenland, with an international airport offering flights to Iceland and Denmark. Narsarsuaq is also served by Disko Line ferries who run several trips each day between Narsarsuaq and Qaqortoq via small boat and helicopter. Obviously I chose the helicopter option ☺
When I arrived at the Qaqortoq heliport early on the morning of my flight it was cold and damp with thick fog reducing visibility to nearly zero. Our 7am flight was cancelled. The woman working at the desk informed the handful of passengers booked for the morning helo that we would be moved to a boat leaving in about an hour. I waited until the rest of the passengers had left before asked if there was any room on the noon helicopter. She assured me that the boat was very fast and safe and seemed confused when I said I really just wanted to fly on a helicopter…it’s a very common way of transportation in Southern Greenland. She smiled though and made a few calls, securing a seat on the next flight!

A few hours later I returned to the heliport and this time the helicopter arrived, refueled, and we were led out to board. No ID checks, no safety briefings, no security, just pick a seat. Moments later we were airborne! The other 5 passengers were Greenlanders or Danes heading back to catch their flights home. It was routine, a commute for them. I had two side-facing seats to myself and spent the 25min flight snapping photographs out the window, admiring the views of mountains, icebergs, and crystal clear waters. It was awesome. After landing in Narsarsuaq however, I discovered that my backpack had been forgotten at the heliport in Qaqortoq and was never put on the helo. This seemed to be a somewhat common occurrence and the Disko Line representative made some calls and arranged for a bunk for me at the hostel as my pack held my tent, sleeping bag, food, etc. The next chance to get my pack would be the following day when a small boat was scheduled to make a run from Qaqortoq to Narsarsuaq. With nothing else to do, I hiked up to the glacier near Narsarsuaq. It was a beautiful walk, not terribly difficult except for a long scramble up a sheer rock wall – there were ropes installed in places. The glacier was huge and beautiful and wildflowers bloomed along the valleys leading to it. 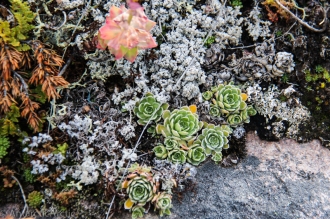 I was originally planning on just one day in Narsarsuaq, but the next day our Air Greenland flight to Nuuk was delayed 11 hours due to weather in Nuuk. So I bought a ticket across the channel to visit the ruins of Bratthild and the statue of Leif Erikson. It was a lovely day and I hiked around a bit then settled along the shore of the fjord to eat lunch before boarding the boat back to Narsarsuaq. 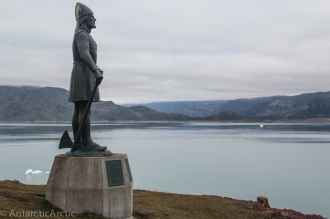 At long last the Air Greenland Dash 8 arrived at the terminal and we boarded the plane. Taking off out of Narsarsuaq we headed Northwest towards Nuuk flying over some of the most phenomenal terrain; Monstrous glaciers flowed from the icecap pulling medial moraines towards the fjords. Jagged ridges of rock stood above the ice casting long shadows. Even the Greenlanders and Danes leaned towards the windows remarking on the beauty and taking photographs. 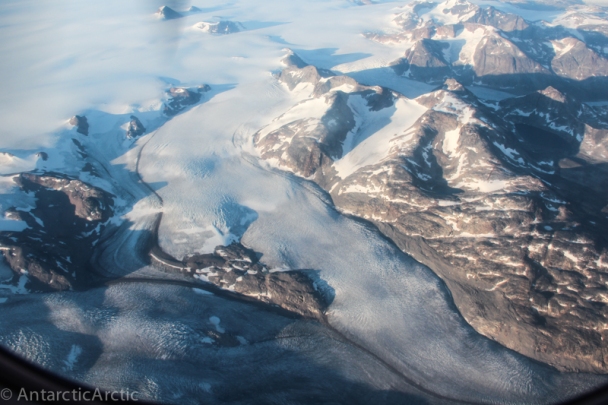 Soon clouds closed over the land below. As we descended into Nuuk the small plane was buffeted by heavy gusts and rain skidded across the tarmac. Pulling hoods tight against the wind we raced from the plane to the terminal. Inside we discovered our flight to Kangerlussuaq had been delayed due to the weather until the following day. Air Greenland had booked us at the Seaman’s Home and instructed me to share a taxi with a young Greenlandic woman. At the hotel we discovered they were overbooked and so the young Greenlandic woman and I were put in the same room as well. After nearly a month camping and staying in cheap hostels the hot shower, soft bed, and breakfast buffet were welcome!

The next day we waited at the airport as flights were again delayed one after the other. Finally we were a go and we pushed against the rain and wind as we walked from the terminal. Aboard the small plane the stewardess smiled as the plane shifted and rocked abruptly with the forceful wind. Thankfully the air calmed as soon as we were off deck and above the clouds. And I was on my way back to Kangerlussuaq.