I left the ice in early February and hit the ground running with a lot of things happening over the past few months. So, better late than never?

There’s a saying in the polar programs:

Someone even made t-shirts one season in McMurdo with that printed on the back. I’m not a fan of this because while there are a lot of people who say this, more or less, their bitterness can ruin the experience for others. But it does exemplify the complicated relationship we all have with the ice. After a season or two most everyone has something they can’t stand. People get burnt out, toasty. After a point we say someone is “perma-toast” – when they come back and are just as toasty as when they left last season. And that’s when they shouldn’t come back – for their sake and everyone who has to work with them.

SO…I have been careful not to say: “I’m never coming back.” But I knew this would be my last season at Summit, at least for a while. So I tried to notice and appreciate all the parts that I love most. I froze bubbles and threw hot water into the air (Hot and Cold Science). I witnessed the beautiful and entrancing reflections of LiDAR on falling ice crystals (Rave Ice). I stood out in -75F temps and listened to the whooshing of my breath freezing as it blew past my ears. I took hundreds of aurora photos and just stood outside under the dark Arctic sky and looked at the stars. I learned constellations and thought about the ice and the darkness. Yet, despite all I love about the ice I am also burnt out, I am ready for a change, for the next chapter.

My flight from Summit arrived on February 9, just a day late due to foul weather in the Denmark Strait between Iceland and Greenland. We were eager for the plane to arrive – to welcome our incoming replacements and receive resupply. The mechanic waited in the shop going over the equipment to refuel the plane and checking the machines to tow the fuel sled. The science techs worked quickly to complete their daily rounds and duties before the folks arrived. I had woken early to start supplying hourly weather observations and cleaned the Big House, waiting by the radio, email, and satellite phones for word of their progress. First we got news that they had departed Iceland, then that they had landed at Constable Pynt (their mid-way refueling point). I announced this over our local radios and everyone wrapped up their projects and prepared for the plane’s arrival.
About an hour before their estimated arrival time the air-to-ground radio in the office erupted with static. I grabbed the mic: “Norlandair, Norlandair. This is Summit on 123.45. I hear you 5 by 1. Do you copy?” Crackling static…but with the hint of a voice beyond. A few minutes later I called again. And this time I could hear their reply! As they approached the signal grew stronger. They requested a weather observations and asked a few questions about the skiway conditions. I relayed to the crew on site that they were about 25 minutes out and wrote a few last minute notes on the white board for my replacement.

The sleek Twin Otter landed smoothly on the snow. They taxied to the fuel tank and the pilots climbed out, opening the door for the passengers in the back and greeting the mechanic with his re-fueling hose at the ready. I waited by the radio until Phil, the incoming manager, arrived and we hugged – then I gave a quick briefing and pointed out my copious notes around the office, grabbed my bags, and made my way out to the plane. The Icelandic pilots were cheerful and grinned at us behind their bundled cold weather clothes. The Twin Otter gleamed in the low angled sunlight. It’s bright red paint in stark contrast to the deep blue sky and sparkling snow. We had just 5 hours of daylight and the forecast was questionable so I climbed on board and we were off, flying over the station and to the East. I sat, overwhelmed with mixed emotions, looking out the windows at the scattered buildings, worn foot paths, and flag lines stretching across the snow…and then it all receded, and was soon lost in the expanse of ice of the polar plateau. 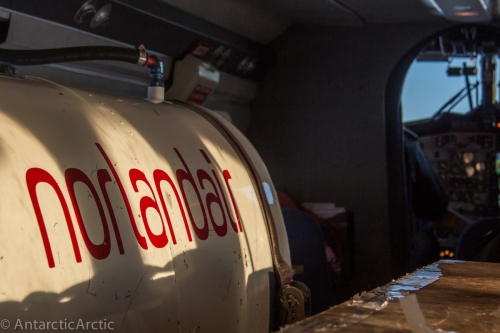 The auxiliary fuel tank inside the cabin

The flight over East Greenland was as beautiful as ever. After a few hours of flying over flat white the ice began to buckle and ripple beneath us. Tips of mountains, called nunataks, poked through the ice; the dark rock standing in sharp contrast to the white snow. The ice thinned, giving way to proper mountains. Sheer vertical cliffs rose up, dividing the ice into deep valleys that shunted it to the sea. Beautiful granite and impressive icefalls covered some of the most rugged terrain I’ve ever seen. Eventually the ice in the valleys met flat sea ice, which in turn broke around the edges into open water. 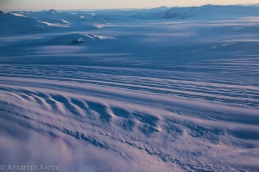 You can see the fluid dynamics of an ice stream here

View out of the Twin Otter 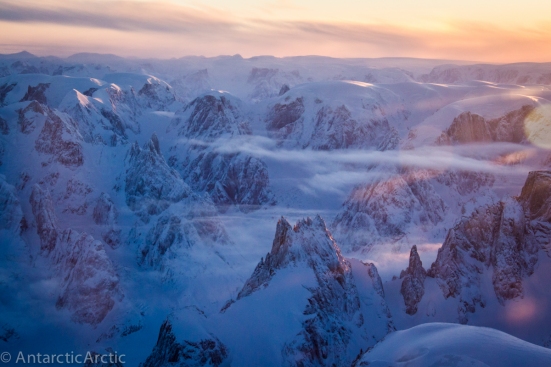 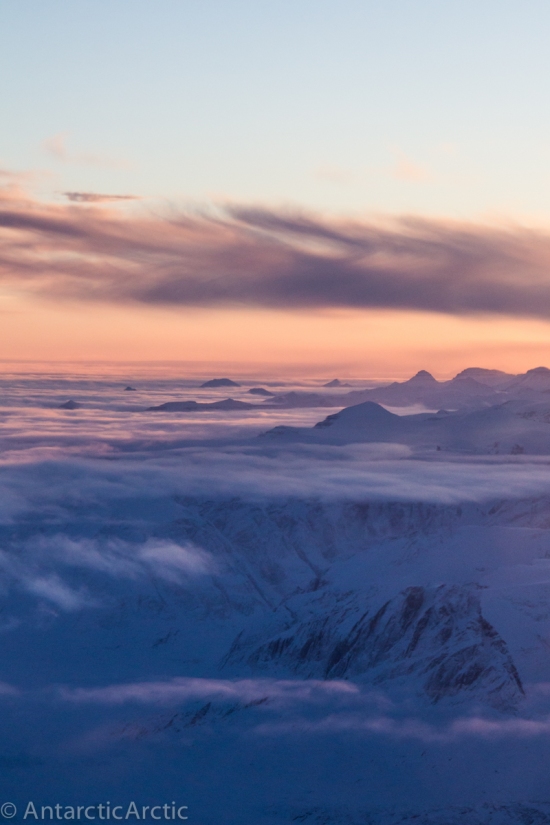 We stopped in Constable Pynt for a quick re-fuel. I was able to get out and stretch my legs

a bit, even sighting an arctic fox on the hill! Inside the little waiting room a poster on the wall advertised the closest town on the Eastern Greenland coast: Ittoqqortoormiit. And then we continued on past the Eastern edge of Greenland to the ocean. The sun settled behind the mountains and ice…leaving us to land in the dark in Akureyri Iceland. 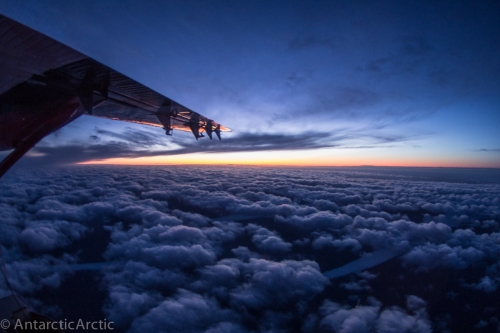 Due to a snow storm everything in Iceland was shut down for the following few days and I enjoyed soaking in hot pools, meeting with some friends in town, and resting up after a long season.

While I am not planning to return to Summit I am sure that I will return to high latitudes sooner than later. I will write more then 🙂 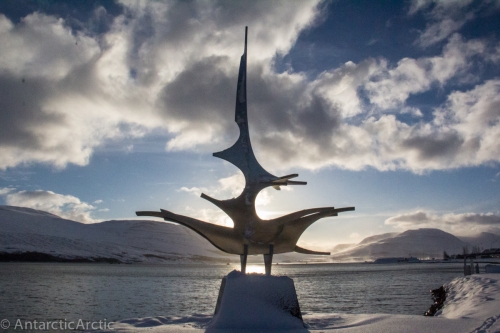 2 responses to “Farewell to Summit Station”