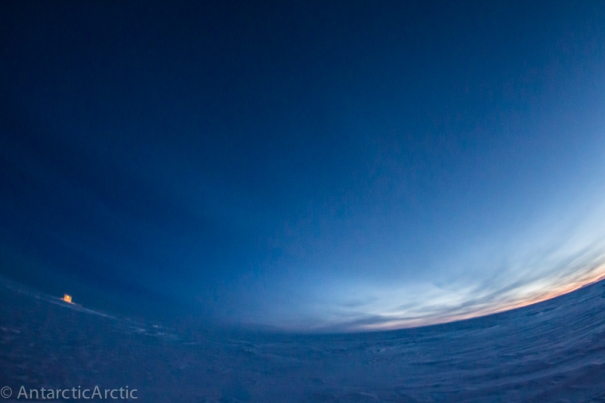 It has been a month since we arrived on station and we have settled into our roles. Every week seems to bring some form of excitement to keep things interesting, and we’ve had a few good wind storms, but thankfully nothing too dramatic. We are doing well and the station is running fine. 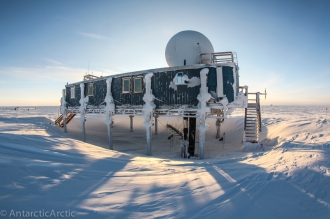 Long shadows beneath the Big House

The MSF at dawn

Last glimpses of the sun 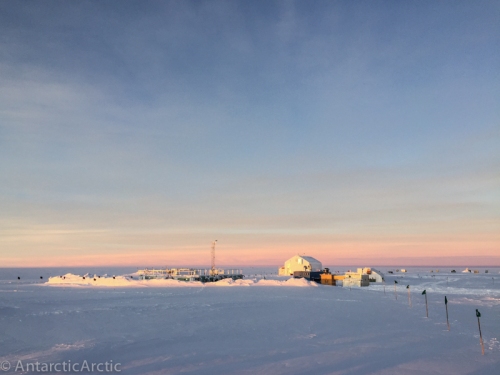 When we arrived it was full on autumn, the sun rose at 8:30am and set at 4:34pm. It was blustery with lots of blowing and drifting snow. Temperatures were erratic; cool, but not terribly cold. Over the past month we have shifted into winter. The sun began rising later and setting later…each day losing 10 minutes, then 15 minutes, then 20 minutes of daylight. Finally, earlier this week on November 13, the sun rose and set for the last time. A mere 1 hour of daylight: 10:46am-11:48am. Unfortunately, that day was cloudy and cold and we did not get a proper view of the sun. But the days since have had beautiful periods of dusk and dawn, the sun stopping just short of breaking the line of the horizon. It’s a magical time with vibrant colors, long shadows, and the potential for auroras though we haven’t seen much yet. 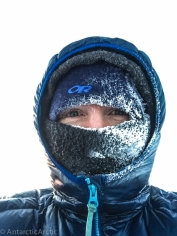 Working outside at -55F

be a shift at -40°F where materials become a bit more brittle, the cold just a bit more sharp. Around -60°F there is another step; the solid steel of the loader tracks creaks and crackles, bamboo shatters, leather becomes solid, and your exhalations whoosh loudly past your ears as the moisture freezes instantly.

As the temperatures have dropped it has grown darker. Below is a solar chart showing hours of daylight in light blue, twilight in greys, and night in black throughout the year at our latitude. The x-axis is months of the year and the y-axis is hours in the day. The break in the graph is daylight savings time here in Greenland. The white double-line on the right is the showing today – which is also broken down at the bottom. You can see that between late May and August the sun never sets while between mid-November and late-January it never rises. Here is my post from sunset last year: Antarcticarctic.wordpress.com/2016/11/23/sunset.

This just a fascinating affirmation of grade school physics and astronomy – proof that our earth is tilted 23.5degress off the elliptic and spherical. For comparison, here is a graph of today at the South Pole – the sun rises and sets just once a year at the poles (which I wrote about here) so you can see they go from 24hrs of daylight on the equinoxes to 24hrs of twilight and night.

And this is a graph of Nairobi which is very close to the equator, you can see there is very little change in daylight throughout the year.

Regardless of the cold and the dark there is work to be done inside and out. We try to wait for good days (warmer temps and lower winds) to do the more involved outside tasking, but we still need to add snow to the melter to make water, fuel the generators, move between buildings, and check on scientific instruments. 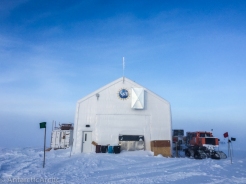 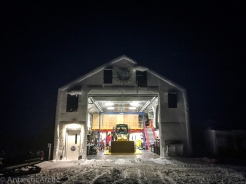 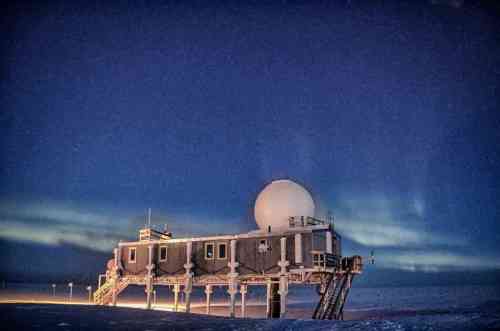 Aurora behind the Big House (HDR)

A month since the last plane and a month yet to go, we’ve settled into our respective winter roles keeping the station running and warm. Our focus so far has been to get everything stored for winter and we’re almost there. All the cargo has been moved to the berm, the buildings have been dragged out away from the main station, and our HEO has been working diligently to clear as much snow as possible from around the remaining buildings before the winter storms begin in earnest.

It’s definitely autumn here on the ice sheet. The sun is setting around 7:00pm now and rising around 6:00am, and by 9:30pm or 10:00pm it’s properly dark outside! It catches me off guard…I know it sounds odd, but I’m used to the ice being either light (summer) or dark (winter). I’m not used to seeing the sun set below the great flat white each day, and how fast it changes!

Along with the darkness comes stars, and auroras! We had our first sighting this week. While I’ve seen the Southern Lights this was my first undeniable glimpse of the Aurora Borealis, the Northern Lights. 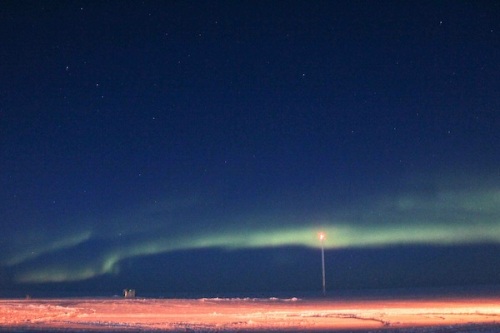 Auroras illuminate the sky behind the 50m Swiss Tower

Named for the Roman goddess of dawn, Aurora, the Northern and Southern Lights are formed by the same process. In summary: charged particles carried by the solar wind are deflected by Earth’s magnetosphere and carried towards the polar regions where they interact with the upper atmosphere releasing photons – light. For a more thorough explanation please refer to my previous post here…or check out these websites for more information:
http://www.swpc.noaa.gov/phenomena/aurora
http://odin.gi.alaska.edu/FAQ/

As these charged particles are released by solar flares and carried on the solar wind, aurora events can be forecasted somewhat, though the accuracy is even less than predicting the weather. (http://www.swpc.noaa.gov/products/aurora-3-day-forecast)

The aurora is a beautiful and magical phenomenon, but it is not rare – it is happening nearly constantly day and night! The light emitted is so faint however, that it can only be seen at night. Every planet with a magnetic field has auroras at the poles – those that don’t, such as Venus, still have the occasional aurora, but they are more random and not specifically polar.

Over the past few days we’ve had stronger winds and more blowing snow in the air, while this has obscured the night sky it did illuminate the normally invisible LiDAR instrument shining through it’s little window in the MSF roof. A very strong laser, the LiDAR instrument is part of a suite of experiments that compose the ICECAPS project that are studying precipitation and cloud properties over the Greenland ice sheet. Check out the official Polar Field Services blog for a more complete summary: polarfield.com/blog/tag/lidar

The CAPABLE Lidar visible in the blowing snow

The NOAA Observatory webpage has some interesting information on the MSF and the ICECAPS project found at: http://www.esrl.noaa.gov/psd/arctic/observatories/summit/
The University of Wisconsin website also has a webpage with information on ICECAPS: http://icecaps.ssec.wisc.edu/

Temperatures have stayed fairly warm so far (between 0F and -20F), though we have had the occasional dip down to -40F. The general trend is that it’s either clear, calm, beautiful, and very cold (-30F to -40F)…or windy, overcast, snowing and warm (+5F to 0F). As the winter progresses and the days get shorter temps will continue to fall. It won’t reach the coldest temps seen at the South Pole in winter, but it gets cold enough!

For those who might be curious, Summit’s weather data is publicly available at: summitcamp.org/status/weather 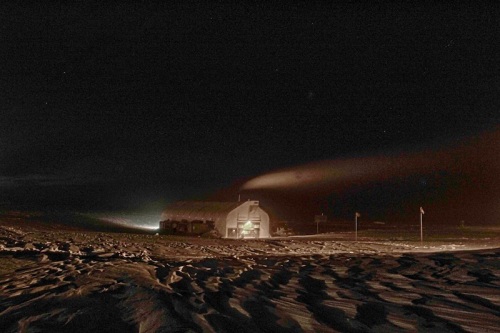 The SOB at night – the generator exhaust illuminated by the building lights. (HDR) 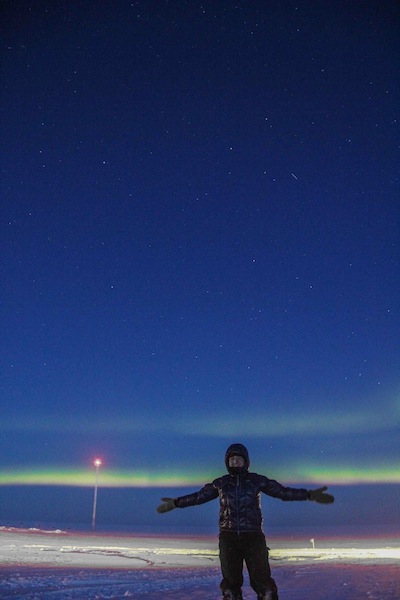 Yesterday a few of us went up on the roof to help replace the covers for the aurora cameras and to install a few pieces of meteorology equipment. The sky was illuminated with streaks of pink and purple. Only 7.7 degrees below the horizon now! 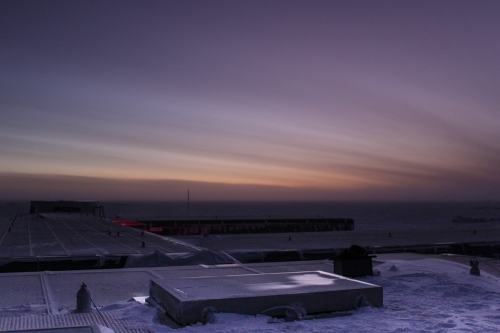 Sunrise from the roof of the station

The full moon from the roof of the station

Dawn is upon us. The sky grows lighter each day – swallowing the stars and washing away the auroras. The first faint glow was just visible in the second week of August, by now it’s taken over the sky. Right now it looks like it does at 530am in Denver, or 5:18am in Seattle…with the brightness of the sunrise circling the horizon 24/7, getting just a little lighter each day.

On clear days now it’s bright enough to see the sastrugi, to see footprints in the snow, and even to label my triwalls without a headlamp! The sky is a deep blue still speckled with stars and hints of aurorae. This month has been stormy, and on cloudy days it’s dark, a veil of clouds sliding across the horizon taking back what light was just revealed, but it’s lighter than black…on the darkest days of June and July it was hard at times to know if one’s eyes were open or closed. The sun hit its low point of 23.5 degrees on June 21, the solstice. Today it’s at 8º below the horizon – Nautical Twilight. 3 weeks until sunrise!

It’s no warmer outside, but just seeing the light is rejuvenating. It feels like a light at the end of the tunnel, a beacon pulling us forward day by day. I know it’s completely illogical, but there were days when it felt like it was never going to return. Like we would be stuck here forever – the stars spinning round and round above us, the same petty dramas played out on repeat. A skipping record. We still have two months left, so we’re far from done yet, but time is progressing. We’re getting closer to the now nearly mythical first plane.

Life inside the station this past month has lived up to the reputation of “Angry August.” This week however, it’s a new month. The window covers will come down and on the 21 the sun will rise above the edge of the world – a new day.

*We’re scheduled to get a Basler and a Twin Otter through here in mid-October, but they’ll just be refueling. There will be no cargo/freshies/mail for us and no one but the crew leaving with them. “Our” first plane will be a C-130 Herc scheduled for Nov 1, but that’s always subject to weather and mechanical delays…that date isn’t by any means set in stone, it’s more like the middle of a bell curve.

The station in the vestiges of the long antarctic night

The LO and VMF arches nearly buried on Aug 8

Sunrise at DA on August 17th 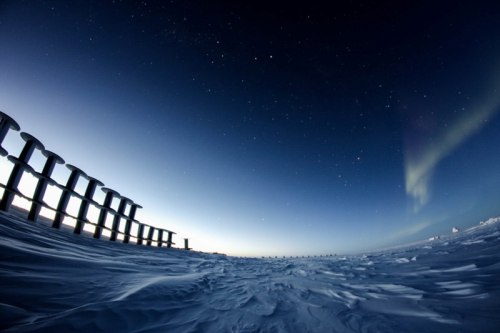 The last of the visible auroras

The sun is now ~9deg below the horizon and it’s getting darker every day! There is still a brighter spot on the horizon where the sun is and we won’t reach technical darkness until May 11. For now we’re still in Nautical Twilight (sun is between 6 and 12deg below the horizon). A few of the research projects here study auroraus and other astronomical phenomenon that require darkness. To avoid interference from white light, and to preserve our night vision we cover all the station windows with cardboard and use only minimal red lights outside. Everyone has been issued a red headlamp.

The brightest stars are out: Canopus, Sirius, the Southern Cross and the two pointer stars. More appear every day. On Monday April 8th we got to witness Iridium flares, a fascinating event in which iridium satelites reflect the sun creating a very bright flare in the sky. It only occurs a few times throughout the winter, and this time around it’s still too light out to get a good picture. We’re having a bit of a wind storm this week, but we’re anticipating our first aurora sighting any day now!

The moon over the waste berms about a week ago 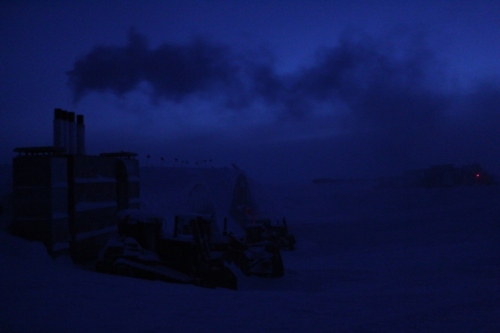 The station in early afternoon 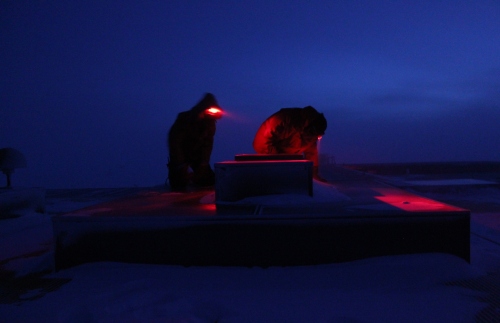 Blaise and Andrew working on the roof to remove a cover for an all-sky camera at -62F with a 25kt wind.