Toast, also known as “Polar T3 Syndrome” or “winter-over syndrome”, is a phenomenon that often presents itself in polar winter-overs. While it’s a popular joke and a common excuse it can ultimately become a serious issue. Someone who’s toast is burnt out – simply done.

In a paper published in 2003 Dr. Palinkas examined winter-overs and the winter-over syndrome: “This syndrome is characterized by varying degrees of depression; irritability and hostility; insomnia; and cognitive impairment, including difficulty in concentration and memory, absentmindedness, and the occurrence of mild hypnotic states known as “long-eye” or the “Antarctic stare.” These symptoms have been observed to increase over time, peaking at mid-winter, and then declining during the third quarter of winter-over duty, only to increase again at the end of the winter-over period. These symptoms were first reported by Frederick Cook (1900), the polar explorer and anthropologist who served as physician aboard the Belgica. Since that time, they have been evident in almost every expedition. Most winter-over personnel at both stations experience these symptoms to various degrees.”

We’re pale with bags under our eyes. It’s not uncommon to see someone just staring at the juice machine for 10-50 minutes…long-eye. Words fail us, simple processes that we’ve done over and over suddenly make no sense. The personality quirks we normally keep hidden from public make their way to the surface – the months of isolation and confinement stealthily eroding our defenses, our social normalcy.

“Everyone is a moon, and has a dark side which he never shows to anybody.”
– Mark Twain

We’ve been living together, just the 44 of us, for over 7 months. Sure, we have a few hours of internet each day and phone calls are relatively easy, but it’s still isolating. Topics for dinner conversations have run their course. Punctuated by long moments of silence our dialogue flows seamlessly from news of a bill in congress to the state of the bathrooms someone House Moused on Monday to the wind speed forecast for next week to the details of designing space suits for “biological functions”…

Some silk flowers and a Verilux HappyLight 6000 that a previous winter-over left for me.

In 2008, Daniel Zwerdling of NPR interviewed several Polies who had wintered-over in previous seasons. It’s interesting and the last bit is dead on…it’s August, “Angry August” as it’s often known, or “Apathetic August” as some people have started calling it this year. As Zwerdling notes more than once in the interview a sense of camaraderie has developed, however I’m beginning to feel a bit toast myself. Some days the idiosyncrasies of my fellow winter-overs get under my skin and I’m grateful that I’m the sole Wastie here – that I work alone. When it gets too much I can always go outside to deal with my triwalls and snow drifts in solitude, the immensity of the sky around me putting into perspective all the trials and tribulations that seem the world to us inside the station.

NPR Zwerdling:
Medical researchers actually have a name for this. They call it T3 Syndrome, or as the polies put it, you’re toast. Studies at the pole show when you isolate a small group of people in a dark and freezing place, their body chemistry changes. They feel worn down, weepy, crabby. They sleep too much, or they don’t sleep at all. They turn on each other…People’s spirits get dark in the hear of winter

BK Grant:
When the “Lord of the Flies” started to happen, it just kept going. Our two cooks couldn’t be in the same building together. You know, when the power plant goes down, you’re supposed to run towards it and help; some didn’t. So when that starts going down, then you start seeing the true inside of humans. I really thought that grown-up humans would rise to the challenge. That’s what I thought I would see when I signed up, and they don’t.

NPR Zwerdling:
But then, the sun finally comes back. It jumps above the horizon in late September, and the polies realize they’ve made it. In fact, they formed tight bonds, and they say they see the world differently than they did before.

The recorded interview and full transcript can be found at: http://www.npr.org/templates/story/story.php?storyId=89967120

Another link worth checking out is the blog by the Doc at Dome C from 2012 – the whole blog is worth reading through, but this post in particular is about winter, darkness, and some of the physiological and psychological changes he noticed: http://scientistatwork.blogs.nytimes.com/2012/09/06/lost-in-time-in-the-antarctic-ice-age/?_r=0

It’s late August already, and most of us here are showing at least a few signs of being toast…Ultimately though, we’ve made it through the darkest hours, days, weeks, and months – there is a glow on the horizon.
It’s incredibly powerful – this undeniable evidence that the sun will return. It sounds absolutely crazy, but for a while it seemed like we would be stuck here forever, windows covered, with only the cold black outside and the same 44 people driving each other nuts inside. But there’s a glow, a pre-dawn hint of light and I know the sun will rise, the temps will warm, the planes will come eventually, and before we know it winter will be over. 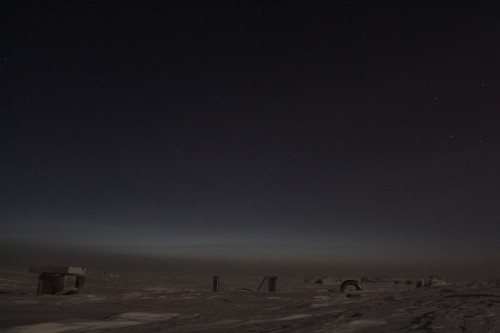 A hint of light on the horizon.