Schedule a plane and you’ll get a storm…or so it seems more often than not!

Our first flight since mid-August was scheduled for Thursday Oct. 20th, but it was delayed a day due to extremely high winds Wednesday evening and into Thursday. We were hunkered down in Con 1 here (see last post) and made the best of it. On Friday morning I woke early to start weather obs. Because we are not an official airport the station supervisor is required to provide current weather observations in METAR form starting 3 hours prior to take off. The flight was scheduled to take off from Akureyri, Iceland at 9am which meant with the 2-hour time change I had to get up at 3:30am to start obs. We only have a handful of flights so that’s fine with me. Thankfully the winds calmed down significantly and the weather looked good. The obs only take 10 minutes or so every hour so I had plenty of time to make a big breakfast for everyone.

Here are a few sample obs:

In the summer we use LC-130 Hercs – big lumbering beasts that can haul thousands of pounds of cargo and dozens of passengers. In the winter however (Sep-Apr in Greenland), the ski equipped Hercs are put to work down in Antarctica and we rely on Twin Otter planes. They are much smaller than hercs, but they can take off and land without much of a skiway and have no temperature limitations. We use them often in the deep field of Antarctica as they do not need a skiway to land. 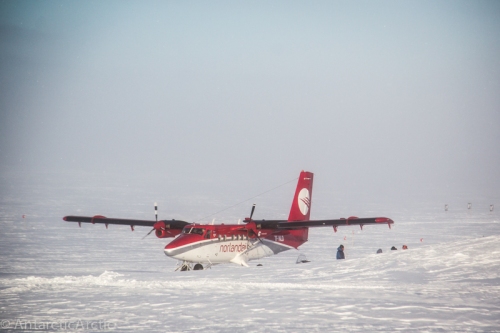 On Oct 21st the Twin Otter took off on time and we got everything here ready – fuel tanks were pre-warmed and staged, the skiway was tracked and the flags cleared of frost, baggage/cargo going out had final weights taken and was staged in the SOB, and I switched on our air to ground radios. The Twin Otter stopped at Constable Pynt (Nerlerit Innat in Greenlandic) on the coast of Greenland to refuel and I got a note from the airport there that they were on their way!

When they were about 15min out I got a call on the radio from the plane asking for current weather conditions, confirming outgoing weights, and requesting fuel. We were ready and waiting with the fuel tanks and snowmobiles with sleds at the flight line. The 6 incoming passengers had just arrived from sea level and would not be used to the 10,500ft elevation or the cold. An hour later the incoming passengers were settling into the Big House and the plane was fueled, loaded, 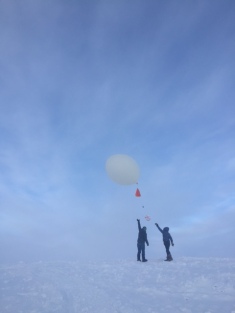 and on its way back to Iceland.

The past week has been a whirlwind of training and turning over duties to the new crew. Half of the incoming winter crew has been here in past seasons so that helps tremendously. The other two have a lot to learn, but they have both worked down in Antarctica so they have a good idea of what to expect and are almost fully up to speed. The new energy and enthusiasm is revitalizing.

The second flight of turnover was scheduled for October 28th. Unfortunately, while weather here at Summit has been decent, weather in between Iceland and Greenland has been poor and they have cancelled 4 days in a row now. Weather delays like this are not uncommon, but it’s never easy on morale especially with those pax due to leave. This flight is the last one until crew turnover in February. It’s bringing in fresh food and a few resupply items for the winter season and will take out the

remaining fall crew. Everyone except me is leaving – I’m here through February.

While I don’t have to do any turnover myself I do have to do weather obs until the flight gets here. Now that daylight savings has ended in Greenland I have to get up at 2:30am to start obs…

Early dawn and a partial moon at 7am in late October. The structures are the MSF and 50m tower.